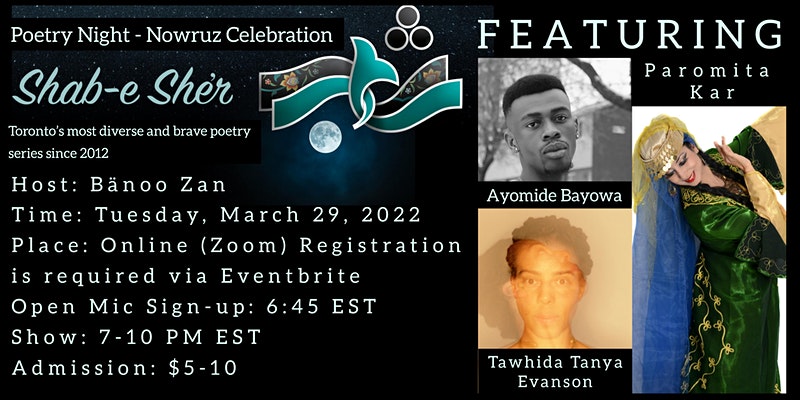 Tawhida Tanya Evanson is a poet, author and multidisciplinary artist. Her two collections are Bothism (Ekstasis 2017) and Nouveau Griot (Frontenac 2018), and her debut novel Book of Wings (Véhicule 2021) was on CBC Canada Reads 2022 Longlist and one of Quill & Quire’s 2021 Books of the Year. With a 25-year practice in spoken word, she performs internationally and has released several albums and videopoems. In 2013, she was Poet of Honour at the Canadian Festival of Spoken Word and received the Golden Beret Award. She is program director of Banff Centre Spoken Word and vice president of the Quebec Writers’ Federation. Based in Tiohtià:ke/Montréal, she moonlights as a whirling dervish.

Paromita Kar holds a PhD in Dance Studies from York University (2014). She is a professional dancer of traditional Indian dances. Paromita also professionally performs dances of Central Asian dances, including Afghan, Iranian, Tajik and Uzbek dance heritages. She is the choreographer and lead dancer of Ensemble Topaz, a Toronto-based integrated music-dance company, which performs dances and music of South Asia, Central Asia and across the Silk Road. She has performed in Canada, the United States, India, the Netherlands and Czech Republic. Her performances and choreographic work have been featured in a number of festivals, such as Tirgan Festival, Toronto International Dance Festival, Tales from the Silk Road at National Arts Centre, Ottawa; as well as a number of international and Canadian music videos. Her website is: paromitakar.wix.com/danseuse