Prizes are great: a luxurious fun-filled-all expenses paid holiday for two in Mazatlan, Mexico – c’mon down.

A Year’s Supply of Rice-a-Roni, the San Francisco Treat C’mon down

Of course, these game show prizes tend to be quite random, unlike literary prizes …

It’s not widely known, and they’re never formally listed among the judges, but for the past 40 years or so the final arbiters of most American literary prizes, most especially the poetry prizes, have been Cheech and Chong, with the exception of the year 2003 when Tommy Chong was serving a jail sentence. It would be interesting to go back and check out the winners that year. Which is why the choices for these American prizes are, 90 per cent of the time, so unaccountably bizarre. Tommy Chong, incidentally, is originally from Canada. Just sayin’ …

But we Americans are a whimsical people, and so our prizes are whimsically chosen. Not so here in Canada. The Canadian is a more virtuous, fair-minded and enlightened sort. I know this to be true because I have been reminded of this fact continuously by my Canadian friends over the past 45 years.

When I was an undergraduate here in Canada in the early 1970s I had a professor in a course on the modern British novel who I shall refer to hereinafter as Professor Ponce. Professor Ponce had won a prize, a Canadian prize in 1964, for a first novel, an extraordinarily bad novel followed by two novels not nearly up to the standard of the first. But it was not the prize he was most proud of. What he was most proud of was an article he published in 1952, “A New Interpretation of the Wasteland,” which strongly suggested that T.S. Eliot was a homosexual. What shall we think of Mr. Eliot’s sexual inclinations? Do we really want to speculate about T.S. Eliot’s sex life? Frank Sinatra’s, maybe. T.S. Eliot’s, no. Regardless, Eliot was not pleased with this interpretation and set loose his solicitors on the journal in which the offending article appeared, effectively suppressing it. What could be more thrilling for a mediocre novelist than to piss-off a great poet, I ask you?

One afternoon Professor Ponce began his class by lifting his right foot and positioning it jauntily on a nearby chair, then lighting a pipe, as was his custom, before the formal bloviating commenced, and in that plummy tone of his, a mixture of his native South Africa and Cambridge University, announcing apropos of nothing seemingly at hand, that the finest fiction writer in Canada, and very possibly the finest writer of fiction in English at that moment in time was a local woman who worked in a bookstore downtown. I figured out almost immediately that he was probably talking about Mrs. Munro, the wife of the proprietor of Munro’s Bookstore. Victoria was not a large place. Also, I was very keenly aware of Mrs. Munro because I spent a fair bit of time in that bookstore and she was extremely attractive, even to a young man like myself, 20 years her junior. In those days she had an intense, preoccupied way about her. One would have thought twice about asking her whether or not the store was in possession of a particular title, which is not necessarily a quality that one would seek out in someone working in a bookstore, wife or not. But of one thing I was certain, her curves and mane of dark curls notwithstanding, if Professor Ponce thought she was wonderful, well then, she almost certainly couldn’t be any good at all.

So who was the fool, I ask you? There was much pride in Canada, and among Canadian women, that Ms. Munro won the Nobel. Being neither Canadian nor female I couldn’t care less if the new laureate was a tranny from Transylvania. Her choice was an excellent and exciting one, not because of her gender and nationality, but because of her art, most especially the art of the short story, which is the superior form to the novel because, in its economy and architecture it more closely resembles the poem. Is there any writer of fiction today whose work comes closer to poetry than the Irish short story writer Claire Keegan at her best? Let’s give her a Nobel, too.

“It is a laborious madness and an impoverishing one,” wrote Jorge Luis Borges, “the madness of composing vast books – setting out in 500 pages an idea that can be perfectly related orally in five minutes. The better way to go about it is to pretend that these books already exist.”

A small liberal arts college in southern California I taught at last fall advertised recently for a new position in the literature department, teaching a survey of the modern British novel. Professor Ponce, sadly, is no longer with us, so he was not a possibility, but some 850 other prospective scholars applied for the position, and in over 800 of the applications, describing why they would be most suitable for the job, made a point of dropping the words “gender” and “ethnicity” in the very first paragraph. Of course, they knew what they were doing and had been trained to do exactly this. In not 20 of the applications did the word “art” appear.

As worthy a choice as Alice Munro was, the prize could, just as deservedly, been awarded to Margaret Atwood or the recently deceased Mavis Gallant. Isn’t it extraordinary that a country of Canada’s population has three women deserving of such an honor? Furthermore, the prize could just as fairly been awarded, in my humble opinion, to two Canadian poets on hand this evening, Anne Carson and Robert Bringhurst. That makes five Canadians, at the very least, whom I regard as Nobel worthy. Does the United States, with ten times the population, have that many?

Was Ms. Gallant, though, truly Canadian, living in Paris for 60 years? Was 1950s Quebec not stimulating enough for her? What sort of Canadian is that? Well, the Canadians showed her, all right, pretty much ignoring her for most of her career. And Ms. Gallant didn’t seem to give a damn. Is Bringhurst really Canadian: L.A., MIT, the universities of Utah and Indiana, the U.S. Army Intelligence? What’s that about! And Anne Carson, where the hell does she hang her hat at the end of the day? Not Chibougamau, I can tell you that. And should the Nobel committee take into consideration Anne and Robert’s work as translators? Bringhurst’s work on the Haida and his now classic work on typefaces? Or Carson the essayist, whose “Eros, The Bittersweet”, her book-length essay, is one of the most extraordinary essays of its kind in English? In other words, the full range of their literary enterprises? Are the Swedes permitted to consider such things? I put the question out there. Is there a Swede here in attendance this evening who might tell us? Please, bring this notion back to your people on the Gulf of Bothnia.

Many here this evening, perhaps most, will disagree with me, but a great nationalist pall descended upon Canada in the 1970s, a chauvinistic/protectionist pall, which sat no more densely anywhere on the ground than here in Toronto. Foreign invitees to the Harbourfront reading series would comment upon it. There are many sound, even irrefutable, arguments to be made for nurturing and protecting organizations like the estimable Canadian National Film Board, among others, and, in general, putting a serious filter in place to mitigate the avalanche of toxic slop from your neighbor to the south. Canadian identity, English and French, was under assault, no question, and remains so. But there were not a few insidious side-effects. Something of a siege mentality set in, with an attendant cultural insecurity that took a lot of oxygen and possibility away from the Canadian arts and drove the country inward, and probably some of its most gifted away. If as Samuel Johnson noted, “Patriotism is the last refuge of scoundrels,” what should we make of cultural patriots?

Inevitably, I suppose, as always seems to be the case, one has to deal with any number of clever, not very talented, operators who are prepared to game the system and feather their own nests at the expense of those more worthy. We certainly have that type in the U.S., insinuating their way onto committees and panels, trading favors. Their names resurface time and again. It’s not merely unseemly. They do real damage.

The arts, like sport, are not fair. It’s not fair, for instance, that the Irish produce so many gifted writers. On the other hand, they tend not to be able to jump very high or compose memorable symphonic music.

In my personal view, a first-rate artist doesn’t need any handicap or special dispensation, really. He or she just needs to be watered now and then, encouraged – or at least not discouraged – and have the work left out in the open air to flourish. We can all do a better job – by which I mean be more vigilant, less timid and predictable – at spotting and rewarding original and serious talent.

Canada is a far more confident country now, culturally, than it was 40 years ago, and I really can’t think of any single entity or organization that helped internationalize the literary end of the culture than the Griffin Trust. It has not only forced – or at least teased – windows open and let the fresh air blow both in and out, it has served to showcase Canadian letters while at the same time highlighting Toronto’s centrality in the larger literary world. It hath been otherwise … This room is filled with excellence tonight, domestic and international. So I raise a toast to you all, most especially the poets singled out for their achievement this evening. Whether it’s a Pinot from the Niagara Peninsula or something imported, of one thing I’m certain: having been to a couple of these Griffin ceremonies before, like everything else, it’ll be first-rate. 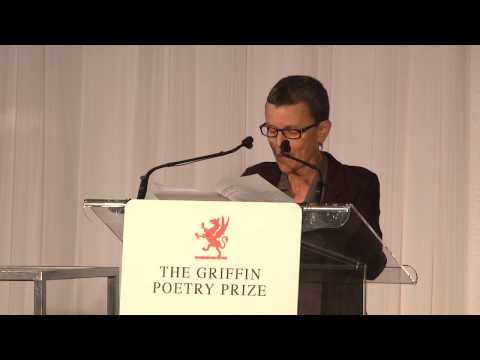 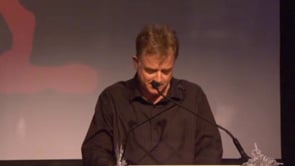 Why Poetry? The Poetry Of Witness Carolyn Forché, Griffin Trustee, Speaks At The Reykjavik International Literary Festival I’m honored to have been invited to participate …
June 22, 2010