An Afternoon with Ada Limón 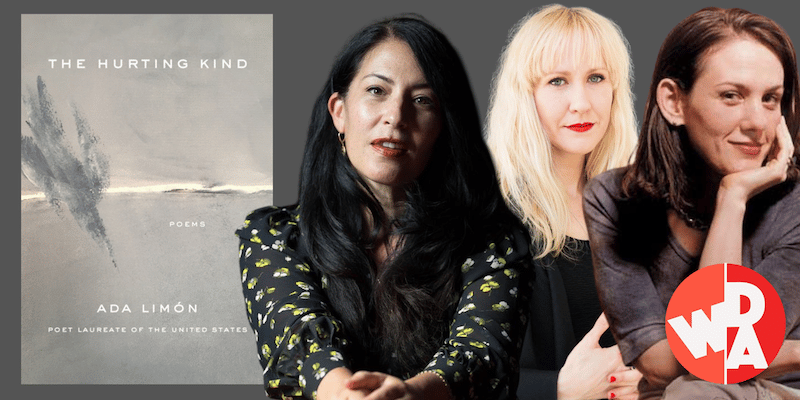 Join Writers for Democratic Action (WDA) on Saturday, August 27th at 3 pm EST for a special online event with new U.S. Poet Laureate Ada Limón in conversation with Rachel DeWoskin and moderated by Tara Skurtu, as a part of WDA’s Book the Vote Democracy Book Club. They will be discussing Limon’s new collection, The Hurting Kind, and the intersections between poetry and democracy.

Book the Vote is a national drive bringing together readers, writers, booksellers, publishers, and librarians in order to register voters in advance of the 2022 elections.

“I have always been too sensitive, a weeper / from a long line of weepers,” writes Limón. “I am the hurting kind.” What does it mean to be the hurting kind? To be sensitive not only to the world’s pain and joys, but to the meanings that bend in the scrim between the natural world and the human world? To divine the relationships between us all? To perceive ourselves in other beings—and to know that those beings are resolutely their own, that they “do not / care to be seen as symbols”?

With Limón’s remarkable ability to trace thought, The Hurting Kind explores those questions—incorporating others’ stories and ways of knowing, making surprising turns, and always reaching a place of startling insight. These poems slip through the seasons, teeming with horses and kingfishers and the gleaming eyes of fish. And they honor parents, stepparents, and grandparents: the sacrifices made, the separate lives lived, the tendernesses extended to a hurting child; the abundance, in retrospect, of having two families.

Along the way, we glimpse loss. There are flashes of the pandemic, ghosts whose presence manifests in unexpected memories and the mysterious behavior of pets left behind. But The Hurting Kind is filled, above all, with connection and the delight of being in the world. “Slippery and waddle thieving my tomatoes still / green in the morning’s shade,” writes Limón of a groundhog in her garden, “she is doing what she can to survive.”

Ada Limón is the twenty-fourth U.S. Poet Laureate as well the author of The Hurting Kind and five other collections of poems. These include, mostrecently, The Carrying, which won the National Book Critics CircleAward and was named a finalist for the PEN/Jean Stein Book Award, and BrightDead Things, which was named a finalist for the National Book Award, theNational Book Critics Circle Award, and the Kingsley Tufts Award. Limón is arecipient of a Guggenheim Fellowship, and her work has appeared in the NewYorker, the New York Times, and American Poetry Review,among others. She is the new host of American Public Media’s weekday poetrypodcast The Slowdown. Born and raised in California, she now livesin Lexington, Kentucky.

Rachel DeWoskin is the author of Two Menus: Poems (The University of Chicago Press, 2020); Banshee (Dottir Press, 2019); Someday We Will Fly (Penguin, 2019); Blind (Penguin, 2014); Big Girl Small (FSG, 2011); Repeat After Me (The Overlook Press, 2009); and Foreign Babes in Beijing(WW Norton, 2005). She is an Associate Professor of Practice in the Arts at the University of Chicago, and an affiliated faculty member of the Centers for East Asian Studies and Jewish Studies.

Tara Skurtu is the author of The Amoeba Game and the upcoming poetry collection Faith Farm. A two-time Fulbright grantee and recipient of a Robert Pinsky Global Fellowship, a Marcia Keach Poetry Prize, and two Academy of American Poets prizes, Tara is the founder of International Poetry Circle and a national steering committee member of Writers for Democratic Action.