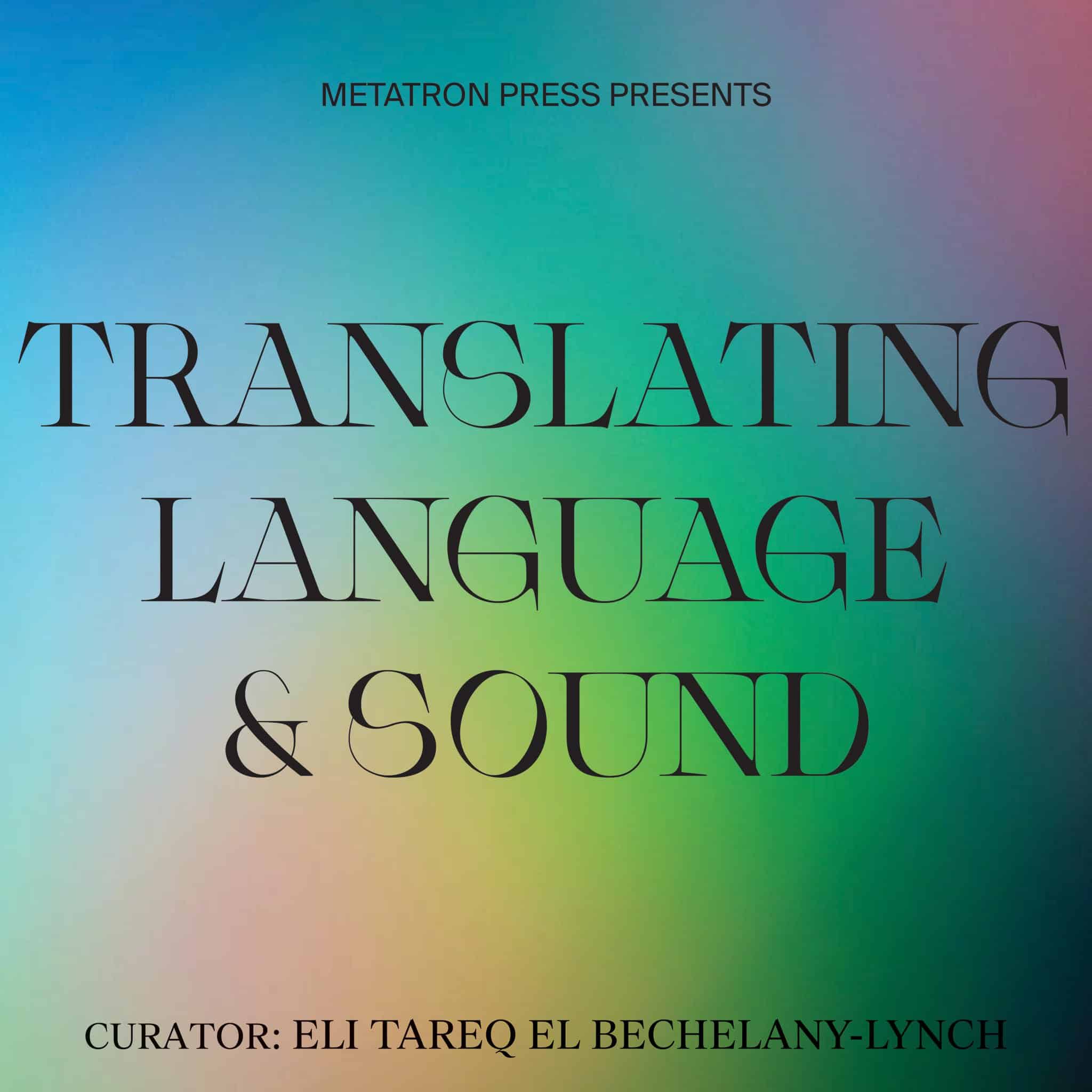 Performance has often been a second thought for many writers. The focus has often been on the written word, rather than what the work might sound like reading out loud. Spoken word poets, of course, have often cared more about what the poem sounds like performed than what it looks like on the page.

The GLYPHÖRIA special issue, Translating Language and Sound, attempts to merge these two concerns, making both performance and page equally important. This issue wants to think through the ways literary work can function off the page, in the world, in translation, in mutation.

In particular, Translating Language and Sound is looking for submissions of sound poetry, multimedia literature, performed fiction that blurs lines, translations that thinks beyond the written word. I’m looking for playful work, funny work, experimental work that strays beyond traditional poetry and prose to bring the work to new life. Collaborations between writers and sound artists/musicians are extremely welcomed and encouraged.

This issue is trying to expand the definition of translation to move beyond the task of changing the language of the work but rather, to change the experience of the work, the feeling of the work, to expand beyond the single author into a  collaborative space. Work in translation is extremely welcome but if you are translating in a traditional sense, try to approach the presentation of the work in new and interesting ways, always thinking about multi-media approaches.

We’re also interested in collecting written poetry that concerns itself with sound, where the lyricism and sound of the words feel like they’re jumping off the page. Please send a written description of your proposed project and examples of your written work as well as examples of your possible collaborators’ sound/video/multi-media work. I’m happy to collaborate with the authors I chose and therefore, the project can be something we figure out together, but please have an idea and plan in mind that we can work towards.

Work by Francophone writers will also be considered.

COMPENSATION
All accepted submissions to GLYPHORIA will be compensated.

ABOUT ELI
Eli Tareq El Bechelany-Lynch is a writer living in Tio’tia:ke. Their work has appeared in The Best Canadian Poetry 2018 anthology, The New Quarterly, Arc Poetry Magazine, and elsewhere. They were longlisted for the CBC poetry prize in 2019. Their book, knot body (2020), published by Metatron Press, was shortlisted for the QWF Concordia First Book Award, and their second book, The Good Arabs, published by Metonymy Press in 2021, was granted the honorary mention for poetry by the Arab American Book Awards and won the Grand Prix du Livre de Montreal. They are an acquisitions editor at Metonymy Press. They are currently translating Gabrielle Boulianne-Tremblay’s La fille d’elle-même from the French, forthcoming Fall 2023. With co-editor Samia Marshy, they are editing El Ghourabaa, an anthology of weird and experimental queer and trans writing by Arab and Arabophone writers.

ABOUT GLYPHORIA
GLYPHORIA is a literary cyber environment designed to optimize the emotional gravity of poetry online through the exhibiting of contemporary multidisciplinary poetry. How do we mark poetry upon the pixelated walls of the internet in new ways? What if there were a space where traditional and contemporary publishing could seamlessly co-exist, merge, and cross-fertilize to inspire a new generation of literary art forms?  If traditional poetry imagined itself on walls, or in print, on paper, bound ~ GLYPHORIA imagines itself as exploring the marking of meaning and presence on ephemeral digitalia. Via a series of guest-edited issues, GLYPHORIA will fuse multimedia poiesis within a living archive of glyphilic poiesis, orchestrating an immersive conversation between various forms and formats. Inspired by the glyph, the most ancient form of written communication, GLYPHORIA reimagines how we publish, share literature and pollinate digital chasms in the 21st century. It is our hope to engage poetry in its current iterations~ influenced and created within the technological age, its pixels and echos and glitches. Together we will bring collaborative poiesis and emotional gravity to our ambient networks and clouds.

ABOUT METATRON
GLYPHORIA is a new project brought to you by Metatron Press. Metatron Press (2014) is an award-winning literary publisher that specializes in publishing contemporary writing by new and emerging authors. We seek out and publish brave and emotionally-resonant, subversive work that both challenges and informs a new direction and style of writing and publishing. Metatron Press pushes relevant and complex conversations into the public sphere, publishing uniquely and definitely contemporary writing while exploring—through our print publications—urgent conversations. Our books are notable for their beautiful design, edgy weirdness, heartfelt vulnerability and at-times difficult subject matter. We are not afraid to publish work that advances our human understanding of one another. We are known for our unique and distinctive pocketbooks of poetry and short fiction (short stories, novellas and novels), although we are also known to support new hybrid forms of literature. Our works are firmly cemented in the here and now, and allow authors space to experiment and innovate with their writing.

We are based in Montréal on unceded Kanien’kehá:ka territory.