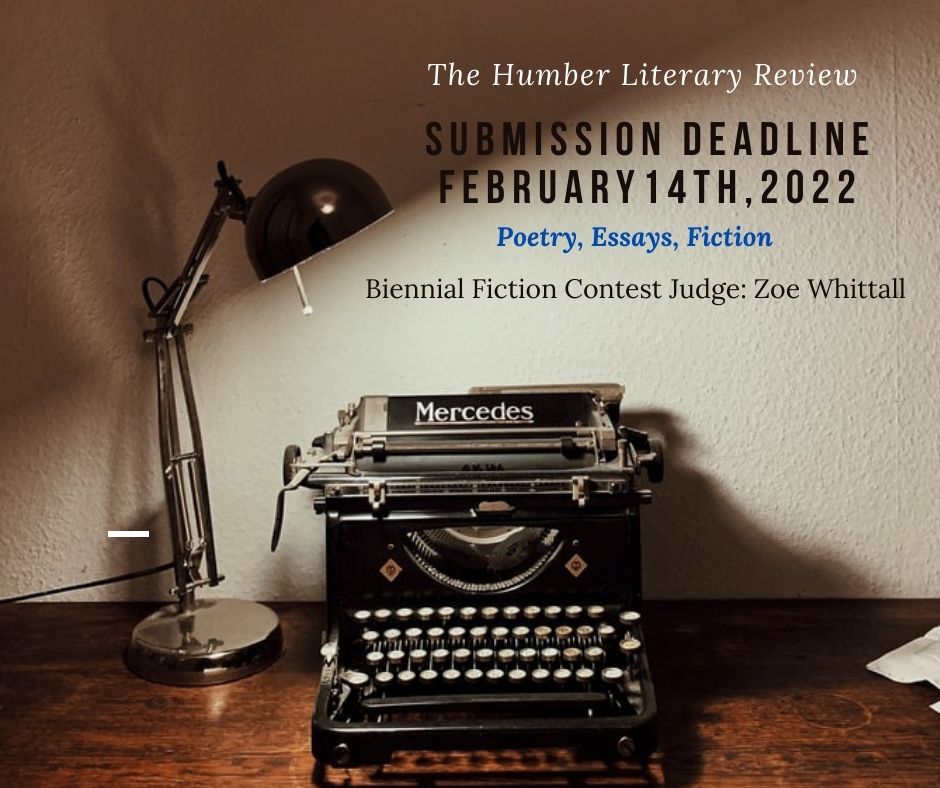 The Humber Literary Review, a literary and arts magazine, is excited to announce that it is now accepting submissions for its biennial emerging* Canadian writers fiction contest. All winning entries, including three honourable mentions, will be published in print in the Spring 2022 issue.

*An Emerging Writer = A Canadian writer who has not yet published a book.

Contest judge Zoe Whittall is the author of four novels and three volumes of poetry. Her third novel, The Best Kind of People, was shortlisted for the Scotiabank Giller Prize and is currently being adapted for a limited series by director Sarah Polley. It was Indigo’s #1 Book of 2016 and a Heather’s Pick, and was chosen as Best Book of the Year by the Walrus, the Globe and Mail, Toronto Life and the National Post. Her second novel, Holding Still for as Long as Possible, won a Lambda Literary Award for trans fiction and was an American Library Association Stonewall Honor Book. Her debut novel, Bottle Rocket Hearts, won the Dayne Ogilvie Prize and is being adapted for screen. Whittall sold her first sitcom, Breaking, to CTV in 2014 and recently optioned the half-hour comedy Wellville to CBC. She has worked as a writer on the Emmy Award–winning comedy Schitt’s Creek and the Baroness Von Sketch Show, for which she won a 2018 Canadian Screen Award. Zoe Whittall has an MFA from the University of Guelph. Born on a sheep farm in the Eastern Townships of Quebec, she has called Toronto home since 1997. Her latest novel, The Spectacular, was recently published.

Three stories earning honourable mention will also be published; these writers will receive $100 each.

Entry fee: $20 per submission of one story not longer than 2500 words.
(All contest entrants receive a one-year subscription to the HLR!)