Poetry and the Environment 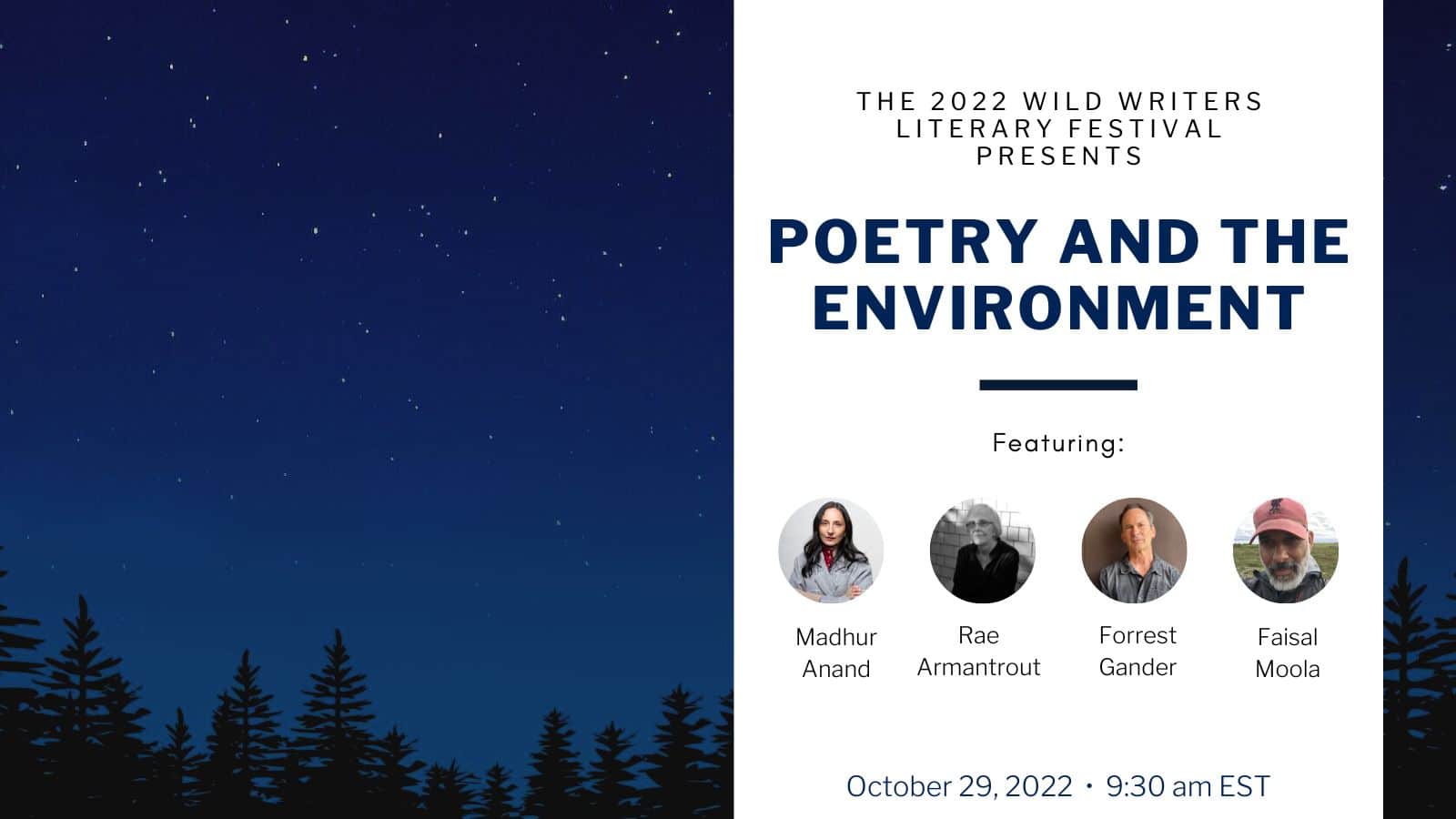 The solution to most environmental challenges are at their core human issues.

Join Governor General Award winner Madhur Anand and Pulitzer Prize Winners Rae Armantrout and Forrest Gander in conversation with Faisal Moola to explore the connections between poetry and the environment and how artistic invention can empower us to re-examine the past and imagined environmental futures.

MADHUR ANAND’s debut book of prose This Red Line Goes Straight to Your Heart (2020) won the Governor General’s Literary Award for Nonfiction. Her debut collection of poems A New Index for Predicting Catastrophes (2015) was a finalist for the Trillium Book Award for Poetry, named one of 10 all-time “trailblazing” poetry collections by the CBC and received a starred review in Publisher’s Weekly. Her second collection of poems Parasitic Oscillations (2022) was published to international acclaim and named the “top pick” for Spring poetry by the CBC. She is a professor of ecology and sustainability at the University of Guelph, where she was appointed the inaugural Director of the Guelph Institute for Environmental Research.

RAE ARMANTROUT’s recent book Finalists (Wesleyan 2022) “emanates the radiant astonishment of living thought,” writes David Woo for the Poetry Foundation.  Her 2018 book, Wobble, was a finalist for the National Book Award that year. Her other books with Wesleyan include Partly: New and Selected Poems, Just Saying, Money Shot and Versed. In 2010 Versed won the Pulitzer Prize for Poetry and The National Book Critics Circle Award. Retired from UC San Diego where she was professor of poetry and poetics. She is the current judge of the Yale Younger Poets Prize.

FORREST GANDER, a writer and translator with degrees in geology and literature, was born in the Mojave Desert and lives in northern California. His books, often concerned with ecology, include Twice Alive, Be With, winner of Pulitzer Prize, and the novel The Trace. Gander’s translations include It Must Be a Misunderstanding by Coral Bracho, Spectacle & Pigsty by Kiwao Nomura (Best Translated Book Award), and Then Come Back: the Lost Neruda Poems. He has received grants from the Library of Congress, the Guggenheim, Howard, Whiting and United States Artists Foundations.

FAISAL MOOLA, PhD is an Associate Professor at the University of Guelph. He works closely with a number of First Nations in defence of their lands including the Dunne-za First Nations in British Columbia and Grassy Narrows First Nation in Ontario. Faisal has published widely in scientific journals on topics of ecology and environmental policy. He has contributed to a number of significant conservation and sustainability policy outcomes, including the protection of over 2 million hectares of temperate rainforest in British Columbia, the expansion of the internationally renowned Greenbelt in Ontario and the creation of Canada’s first Urban National Park.