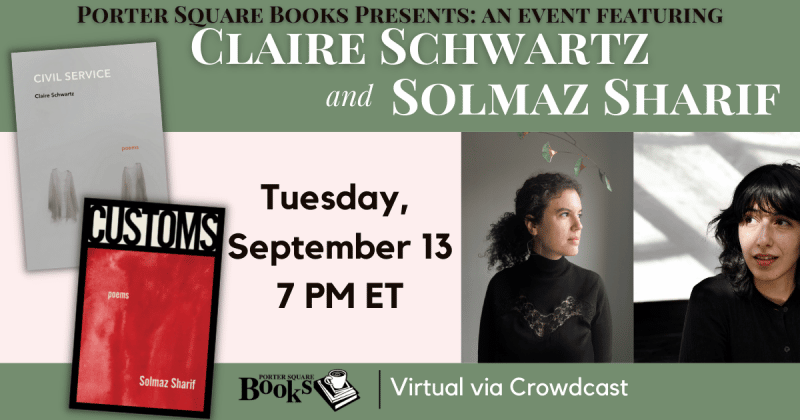 Porter Square Books is happy to welcome Claire Schwartz to celebrate the release of her debut poetry collection, Civil Service!  Fellow poet Solmaz Sharif will be joining the author with a reading from her own collection, Customs, which released earlier this year and conversation.

This event will take place on Tuesday, September 13 at 7pm ET, hosted virtually via Crowdcast. Signed copies of Civil Service will be available- order your copy from this page prior to the event date to ensure you get a signed copy!

A study in complicity with crushing state violence and an invitation to a chilling, remarkable debut.

While the spectacle of state violence fleetingly commands a collective gaze, Civil Service turns to the quotidian where political regimes are diffusely maintained—where empire is the province of not a few bad actors, but of all who occupy and operate the state. In these poems populated by characters named for their occupations and mutable positions of power—the Accountant, the Intern, the Board Chair—catastrophic events recede as the demands and rewards of daily life take precedence. As a result, banal authorizations and personal compromises are exposed as the ordinary mechanisms inherent to extraordinary atrocity. Interwoven with bureaucratic encounters are rigorous studies of how knowledge is produced and contested. One sequence imagines an interrogation room in which a captive, Amira, refuses the terms of the state’s questioning. The dominant meanings of that space preclude Amira’s full presence, but those conditions are not fixed. In a series of lectures, traces of that fugitive voice emerge as fragmentary declarations, charging the reader to dwell beside it and transform meaning such that Amira might be addressed.

In this astonishing debut, Claire Schwartz stages the impossibility of articulating freedom in a nation of prisons. Civil Service probes the razor-thin borders between ally and accomplice, surveillance and witness, carcerality and care—the lines we draw to believe ourselves good.

Claire Schwartz is the author of the poetry collection Civil Service and the poetry editor of Jewish Currents. Her writing has appeared in the Nation, Poetry Magazine, Virginia Quarterly Review, and elsewhere.

In Customs, Solmaz Sharif examines what it means to exist in the nowhere of the arrivals terminal, a continual series of checkpoints, officers, searches, and questionings that become a relentless experience of America. With resignation and austerity, these poems trace a pointed indoctrination to the customs of the nation-state and the English language, and the realities they impose upon the imagination, the paces they put us through. While Sharif critiques the culture of performed social skills and poetry itself—its foreclosures, affects, successes—she begins to write her way out to the other side of acceptability and toward freedom.

Customs is a brilliant, excoriating new collection by a poet whose unfolding works are among the groundbreaking literature of our time.

Solmaz Sharif is the author of Customs and Look, which was a finalist for the National Book Award and a New York Times Notable Book. She has received a Rona Jaffe Foundation Writers’ award, a Lannan Literary Fellowship, and fellowships from the National Endowment for the Arts and the Poetry Foundation. Her poetry has appeared in Granta, the New Republic, and Poetry. She teaches at Arizona State University.