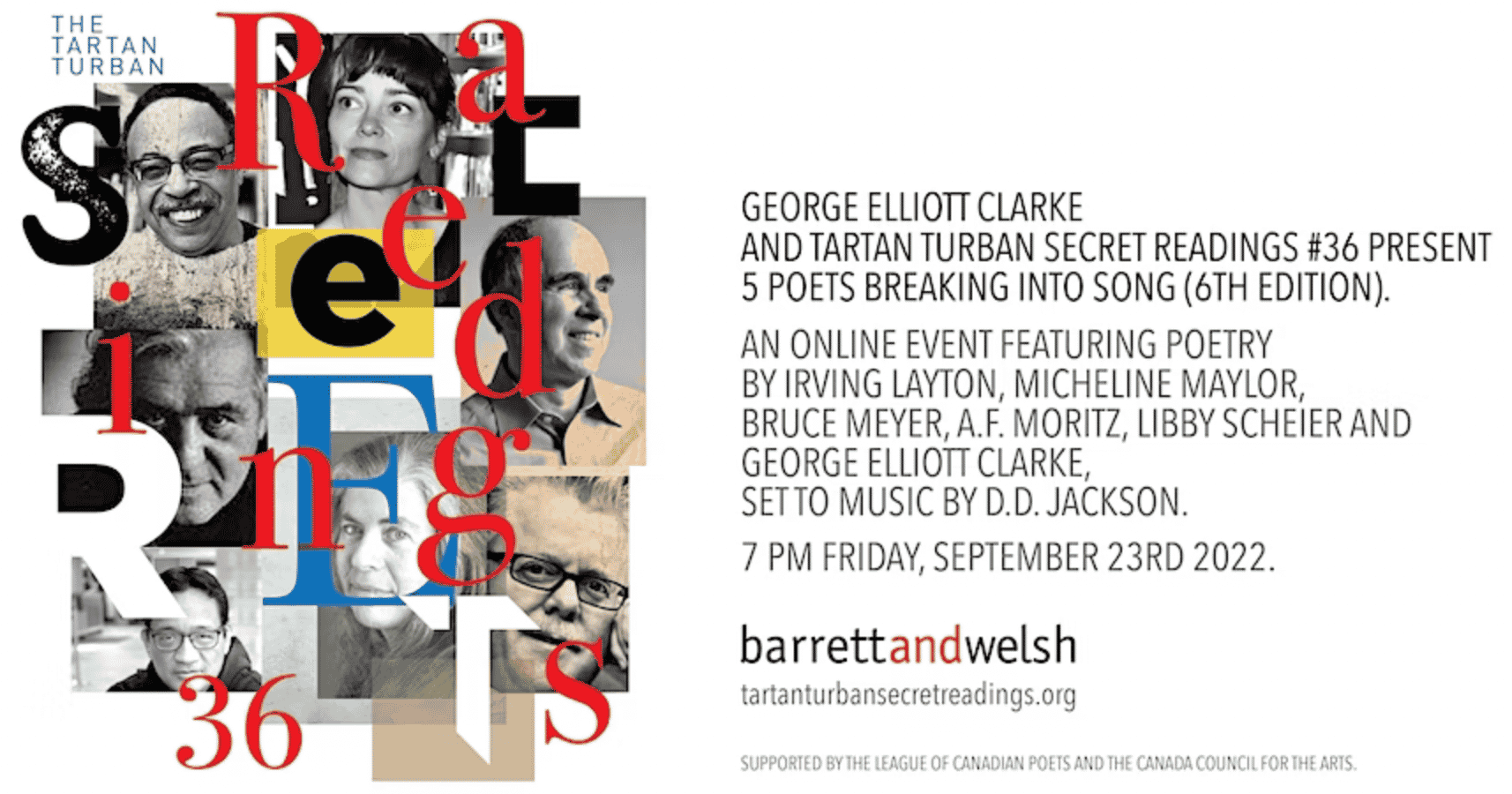 Writers will be participating virtually. Attendees who book here will receive a link to join the event on the day of the reading during the hours scheduled.

The 4th Poet Laureate of Toronto (2012-15) and the 7th Parliamentary/Canadian Poet Laureate (2016-17), George Elliott Clarke was born in Windsor, Nova Scotia, in 1960. A professor of English at the University of Toronto, Clarke has also taught at Duke, McGill, UBC, and Harvard. His recognitions include the Rockefeller Foundation Bellagio Centre Fellowship (US), the Pierre Elliott Trudeau Fellows Prize, the Governor-General’s Award for Poetry, the National Magazine Gold Award for Poetry, the Premiul Poesis (Romania), the Eric Hoffer Book Award for Poetry (US), and International Fellow Poet of the Year, Encyclopedic Poetry School [2019] (China). Books of his poetry have been translated into Chinese, Italian, and Romanian. Since 1983, he has published some 25 volumes of poetry. He dreamt up the “5 Poets Breaking Into Song” project to bring poets and composers together.

D.D. Jackson is a Canadian-born, two-time Emmy-winning composer/songwriter/producer (5-times nominated), and a jazz pianist/composer who has recorded 13 CDs of mostly original music as leader or co-leader (including 2 for the major label BMG), ranging from his Juno Award-winning solo piano CD …so far, to his larger-scale meditation on the events of 9/11 (Suite for New York). He has also performed/recorded and/or toured around the world with diverse artists ranging from saxophonists David Murray and James Carter, violinist Billy Bang and drummer Jack Dejohnette, to Questlove and Tariq Trotter (“Black Thought”) of The Roots, and previously composed two jazz-influenced operas with Canada’s former Poet Laureate George Elliott Clarke, Trudeau: “Long March/Shining Path” (about the previous “Trudeau” Prime Minister), and Quebecite (based in part on the story of his African American father and Chinese mother). As a composer for television, he has written songs and other music for a wide range of shows; and as a writer, he also penned a popular column for DownBeat magazine entitled “Living Jazz” for five years. Also an award-winning professor, Jackson teaches music at Long Island University and at Brooklyn College. D.D. lives in Maplewood, NJ (just outside of New York City) with his wife Elizabeth, their 15-year-old son Jarrett and 13-year-old daughter Aria. His website is: https://ddjackson.com

Jewish-Canadian poet Israel Pincu Lazarovitch, or Irving Layton, was born in the Romanian town of Târgu Neamt in 1912. His family moved to Montreal when he was a year old; when his father died, Layton, just 13, enrolled in high school, where his encounter with Tennyson’s poem “The Revenge” inspired him to try writing. After earning a degree in agriculture at Macdonald College, becoming a socialist, and briefly, a World War II Canuck soldier, Layton published his first book in 1945 and soon counted poet and singer Leonard Cohen as his student and a close friend. US Poet William Carlos Williams introduced Layton’s first celebrated volume, A Red Carpet for the Sun (1959), which received the Governor-General’s Award. Dozens of volumes later, Layton won two Nobel Prize nominations (from Italy and Japan), Italy’s Petrarch Prize for Poetry, and saw his work multiply as it was translated into Italian and Greek. He passed away in 2006 at the age of 93 in Montreal. Leonard Cohen was a pallbearer.

Dr. Micheline Maylor is a Poet Laureate Emeritus of Calgary (2016-18). Her most recent book is The Bad Wife (U of A Press 2021), which was longlisted for the Raymond Souster Award for best Canadian book of poetry and was short-listed for the Robert Kroetsch award for experimental poetry. She is a Walrus talker, a TEDX talker, and she was the Calgary Public Library Author in Residence (2016). She won the Lois Hole Award for Editorial excellence for poetry in Alberta (2019). Micheline attained a Ph.D. at the University of Newcastle Upon Tyne in English Language and Literature with a specialisation in Creative Writing and 20th Century Canadian Literature. She is retired from teaching creative writing at Mount Royal University in Calgary where she won the 2015 Teaching Excellence Award, the 2018 Distinguished Faculty Award She serves as Senior acquisitions editor for poetry at Frontenac House Press since 2012. She is the co-founder of Freefall Literary Society and remains as senior poetry and reviews editor.

Bruce Meyer (born April 23, 1957) is a Canadian poet, broadcaster, and educator—among other roles in the Canadian literary scene. He has authored more than 64 books of poetry, short fiction, non-fiction, and literary journalism. He has taught at Georgian College in Barrie and at Victoria College at the University of Toronto. His CBC Rado appearances remain the broadcaster’s bestselling spoken-word CD series and inspired his 2000 bestseller The Golden Thread: A Reader’s Journey Through the Great Books. He has organized dozens of literary conferences and festivals, and his works have been published in Canada, United States, United Kingdom, Ireland, Switzerland, Italy, Spain, India, Pakistan, China, Nigeria, Bangladesh, Chile, Mexico, Yemen, Greece, Australia, Denmark, Netherlands, and have been translated into French, Spanish, Italian, Dutch, Danish, Hindi, Chinese, Urdu, Bangla, Greek, and Korean.

A. F. Moritz‘s most recent books of poems are The Garden: a poem and an essay (Gordon Hill, 2021), As Far As You Know (Anansi, 2020) and The Sparrow: Selected Poems (Anansi, 2018), as well as a new edition of poems in Greek translation selected from The Sparrow (Vakxikon, 2021). He has published twenty volumes of poetry and his work has received the Guggenheim Fellowship, the Griffin Poetry Prize, the Award in Literature of the American Academy of Arts and Letters, the Bess Hokin Award of Poetry magazine, and has three times been selected a finalist for the Governor General’s Award, among other honours. He is presently the Poet Laureate of the City of Toronto, the sixth poet to hold that office.

Libby Scheier, (May 31, 1946 – November 14, 2000) was born in Brooklyn, New York, Libby Scheier was educated at Sarah Lawrence College (BA 1968, areas of concentration: French, philosophy); and at State University of New York at Stony Brook (MA in English 1971). She held several offices in The Writers’ Union of Canada — Ontario Representative and National Council member, 1986-88, and Chair, Rights and Freedoms Committee, 1988-89. At P.E.N. International (Canadian Centre, English-Speaking), she was a Member, Writers-in-Prison Committee. She also belonged to the League of Canadian Poets, Modern Language Association, and the Canadian Union of Educational Workers. She moved to Toronto in 1975 after living in France, California, and Israel. She died in Toronto in 2000.

Want to receive updates on the next reading? Follow our FB group for updates on and the link to the Eventbrite registration page for each reading. (we do ask that you register if you plan to attend). You can also sign up for our email list here.

Anyone attending is welcome to read or perform (if you are a musician) in our open mic sessions.

If you are a writer or musician who would like to perform in the open mic session, we ask that you listen in to at least one session to get the flavour of the evening and join in on your next visit.

To participate in TTSR #36, please contact series curators Gavin or Mayank or TTSR36 curator Archna Sahni. This allows them to line up readers and manage the evening in a way that respects each writer’s work.

The ambience at our readings is intimate, extremely informal and very supportive. Open mic readers are given 4 minutes in total, including a brief introduction to themselves and their work. There are detailed open mic guidelines posted in our FB group.

Open mic readers who have published works they would like to offer for sale are free to mention it after finishing their readings.