Because they were "of the water."

Because they were given Russian names.

He was born with hushed words.

Because his mother had a bad heart and his father was traumatized.

They took him from the sea.

Because he came to the school charitably, before.

Because there is only one photo, after.

They told the skeptics, yes, it can be done.

Because it could be done.

Because he died of consumption.

There are words I can't say.

Because he was survived by two sons.

Because they were called half-breed.

Because that second son took to drink.

I've always been afraid of the sea.

Because it doesn't mean salmon-fisher.

Because I need to know I can say these words.

Because it means "mischievous, energetic."

Because he was an orphan.

Because in summer, my skin turns redder than my father's.

Because they asked my mother, Is she adopted?

Because I too am of the water.

Because I hear these words.

I will split my bones and fit my skin to the sea.

I will shape my mouth to angle these words with the wind. 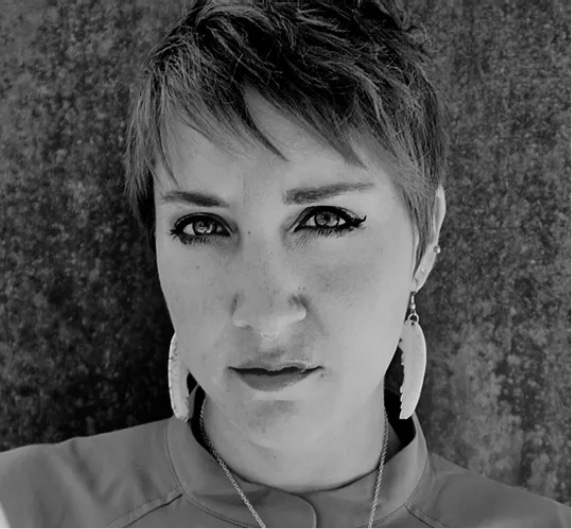 The hypnotic refrains of the poem “Shebutnoy” from Abigail Chabitnoy’s 2020 Griffin Poetry Prize shortlisted collection How to Dress a Fish lend a driving rhythm to the poet’s excavation and scrutiny of her family’s history. This poem dedicated to and showing dedication to her great-grandfather reveals equally what he endured and her unwavering determination to…

The hypnotic refrains of the poem “Shebutnoy” from Abigail Chabitnoy’s 2020 Griffin Poetry Prize shortlisted collection How to Dress a Fish lend a driving rhythm to the poet’s excavation and scrutiny of her family’s history. This poem dedicated to and showing dedication to her great-grandfather reveals equally what he endured and her unwavering determination to reveal it.

The repeated chant of “Because” punctuates an almost blunt laying out of Chabitnoy’s great-grandfather’s life and what he went through in that comparatively short span. (He died of consumption at the age of 34, shortly after the poet’s grandfather was born.) Simultaneously, that forceful itemization delineates how she takes his personal story and uses it as an entry point into a deeper examination of Native American identity and how it struggled to survive against generations and layer upon layer of oppressions.

Chabitnoy offers detailed and heartfelt background on how she researched and pieced together Michael Chabitnoy’s story in a February, 2020 interview with Jennifer Elise Foerster of Poetry Northwest. Of paramount importance was holding onto the essence of the story, amidst all of what had to be at times emotionally daunting work:

“The more research I did, the more questions I had, the more the narrative was complicated, the waters muddied. I’d never liked learning history in school—too many exercises in rote memorization, too many names, dates, and facts to be recited. But what I realized when I was free to learn history on my own was that history too is subjective, and what often gets lost in the curriculum is the story. I wanted to make these stories accessible outside of Kodiak, both for others who had been displaced, and to draw attention to the wider narrative of our national understanding of history and its flaws. There are so many historical narratives we hold as sacred and beyond questioning that we forget they’re just that—narratives, told from one perspective.”

Connecting the research back to her poetic practice, she observes:

“I’m realizing that this research isn’t a short-term task to be completed. Like reading poetry, it is a space in which to dwell. My poetic practice can be described as one of accretion, of finding patterns. And it can be overwhelming at times, but I’ve found the trick is to just keep working, and to dwell, to be present, in the work, rather than let oneself look too far ahead at the “bigger picture.” I’m searching for the whole through the pieces.”

The repetition of “Because” is a simple pattern. Movingly, that pattern makes way for a new one with the two occurrences of “I will” – the narrator, the poet, the great-grandchild, the descendant speaking with commitment of how she will take forward what she has researched and gleaned.

This poem is but one example of an entire collection of steadfast poetic explorations of family, history and legacy. Those explorations take unique and haunting – visually and sonically – approaches to gathering and presenting what is found in the archives and assembling it in commemorative and memorable fashion.